The Origins of the Crystal Warrior

The Crystal Warrior (CW) is a powerful being of love, power, and healing. He is the higher aspect of me, Keith E. Smith, which emerged in my consciousness in the early 1990s.

The CW and the Crystal Healing Wands (CHW) appeared in my life at a time when I was struggling with my direction in life. I was experiencing physical health concerns combined with a great deal of emotional, psychological, and spiritual uncertainty. Additionally, I was living in NYC at the time pursing the arts. I was finding that the daily stress of living in NYC was taking a toll on my well-being. What sustained me during this period was my daily meditation practice. Each evening after work, I would practice meditations; sometimes for hours at a time. I began to experience increased psychic phenomenon, intuitiveness, and the occasional ability to read people’s thoughts. During this period, I also began to record my dreams. My dreams often foretold events in my life. I later learned that I had the ability to create a future experience, which in my normal consciousness experienced as deja vu. I was subtly being prepared to consciously communicate with the CW.

As the powerful presence of the CW continued to emerge, I began to experience his strength, knowledge, power and love. I experienced a more positive emotional and psychological outlook. I also began to trust myself more; this was especially true of my internal voice and intuitiveness; what I eventually called my internal guidance system (IGS).

The link to the CW, and our ongoing psychic interactions inspired me to bring him to this dimension in the form of drawings and paintings. I began doodling various versions of the CW in my sketch book. These drawings increased the connection between us, and awakened in me an awareness of my own multidimensional self. I created a series of watercolours that depicted the full embodiment of the CW. Some of the rendering presented a being that was part human, animal and multidimensional. I eventually realized that I was the human embodiment of the CW, and that he is not some disembodied entity outside of myself, but an integral aspect of my higher self. Most prominent in the drawings and watercolours that I created was the presences of either a staff or wand. It did not take me long to understand that the wands or staffs were physical representations of his love, power and healing.

The CW is a magnificent being with a powerful loving, healing energy. During meditation, he gently identified himself to me and our connection. He further relayed that we had made an agreement that we would assist individuals on their spiritual journey. We also decided that our work on Earth was to assist other individuals in their journey to reclaim their power and increase their connection to their non-physical selves.

The CW further shared that he is here to empower those individuals with whom he has made spiritual agreements, and or has karma that must be resolved. It is no accident that you have come into contact with the Crystal Warrior, or feel drawn to the Crystal Power Wands. 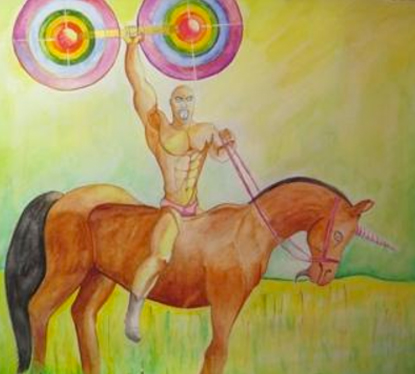