What Is A Crystal Healing Wand?

Crystal Healing Wands (CHWs) are individually handcrafted healing and empowerment tools. Each CHW is unique in the universe. They are envisioned by the Crystal Warrior (CW) on the astral plane and then assembled on the Earth plane. They are constructed by combining quartz crystals, which stores the energies of the Earth and have piezoelectric properties, and copper, which is a grounding and an energy conductor. CHWs also contain other stones, which in turn, have their own individual properties. All of the energies and properties of these crystals and stones are linked and magnified by the technique of wrapping copper wire internally and externally.

Once a CHW is constructed, it is ready for individual programming and use. Simply holding a CHW in your hand is often both energizing and grounding. Working with a CHW has the ability to deepen your meditation and increase your intuition and spiritual growth. Reclaiming your personal power and self-healing abilities, and enhancing the connection to your inner-guidance system are some of the higher spiritual objectives of CHWs. Holding a CHW you will immediately feel a subtle yet powerful electrical surge of energy. This energy will gradually move through your energetic field, balancing and clearing emotional and psychological blocks, and allowing you easier access to your power. With consistent use, your energetic system will be capable of managing a higher flow of energy, knowledge and light, which your higher self seeks to share with you. Once programmed, CHWs become extensions of your subconscious, which is limitless. Each CHW is blessed by the CW to ensure its’ purpose on the Earthly plane is for the highest of human development. If you are ready and allow them to do so, CHWs will take you on a powerful journey of self-empowerment and healing through the realms of spiritual, psychological, and emotional growth.

What do I mean when I speak of ‘personal power’? I am speaking of the individual power, knowledge and wisdom accumulated from multiple past lives. Imagine being born into a world in which you are loved and nurtured to the fullest extent humanly possible. Imagine a world in which you were never made to feel bad about any aspect of your identity. Where your innate abilities and skills are cultivated and developed to their fullest potential. A world in which fear does not exist and love reigns supreme. Take a moment and imagine that world and how you would feel about yourself and the world you live in. What do you imagine being different about you? No, seriously, take a moment now.

As you imagine and allow this fully actualized person; this is what I am referring to when I speak of power.

Sadly, in this reality, we are born into a world in which seen and unseen forces seek to undermine our full potential. These forces include societal, cultural, and institutional influences. For example, society imposes on women standards of beauty. Any woman not living up to those standards is potentially vulnerable to feelings of shame and inferiority. These negative feelings can result in lowered self-esteem and in some cases self-hatred. We are bombarded throughout our lives by messages from the media telling us to buy this or that product to feel or look better and to have a better life. These underlying messages are telling our unconscious mind that we are not good enough, resulting in undermining our innate knowledge and ultimately draining our power. As we respond to these direct and subtle messages, we relinquish our power to outside forces resulting in feelings of powerlessness and dis-ease. Owning a CHW is a conscious statement to your unconscious mind that you intend to reclaim whatever powers were either taken or given away.

Wands and staffs have played a significant role throughout history in the form of myth and storytelling. To better understand the origins of CHWs, I make reference to the recent Transformer movie, the latest in the series titled: “Transformers: The Last Knight.” The initial plot is inspired from the Arthurian legend, in which Merlin, the magician and advisor to Arthur Pendragon plays a pivotal role. Merlin encounters an alien whose spacecraft has crashed on Earth. In his desire to help King Arthur win a battle, he requests that the alien give him a weapon to ensure Arthur’s success. The alien acquiesces and gives Merlin a magical staff which he uses to defeat the enemies of King Arthur. What is not discussed in the movie is the karma that Merlin created by his misuse of the power staff that he would (in future lives) have to resolve. The unresolved karma incurred by Merlin brought to mind a similar life-time for me as the CW in which I too misused personal power and as a result created karma that had to be resolved. 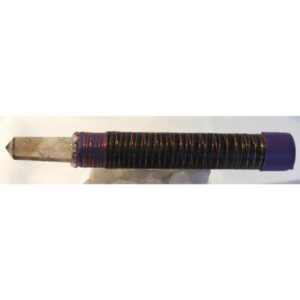 The motivation behind the creation of the CHWs is to resolve past karma. I remembered this lifetime while in a spontaneous trance state induced while receiving body-work on my left arm. As background, for several years, I’ve experienced tingling and numbing in my left arm. I could not identify the source of the discomfort. For many years, I sought relief through various therapies, including, rolfing, chiropractic, craniosacral, and massage. Nothing provided relief until recently. During a craniosacral session, I began to have a vision of the lifetime as the CW in which I was using a powerful armament that was attached to my left arm. It looked like part of the protective shield of a fourteenth century soldier. I saw myself as the CW with the armament on my left arm. There was what appeared to be electrical fire shooting from the device, and it was incinerating an approaching army. As this memory continued to unfold, I began to understand the karmic debt that the CW had incurred, and the source of my years of discomfort. This lifetime was affirmed again during a vision I had while participating in an Ayahuasca ceremony in Peru. The Ayahuasca informed me that the energies coming through the device were a combination of Kundalini, earth energies, and the violent intention of the Crystal Warrior. The misuse of the armament and the powers of the CW created lifetimes of negative karmic debt manifesting as my physical pain in the same origin site. It was further affirmed during my Ayahuasca ceremony that the CW choose CHWs as the tool to repair his karmic debt. It is no coincidence that CHWs perform the opposite function of the original armament by assisting others in understanding and reclaiming their own power.

Disclaimer: The information provided on this website is designed to provide helpful information on the subjects discussed. This website and the information contained herein are not meant to be used, nor should it be used to diagnosis or treat any medical or mental health condition. For diagnosis or treatment of any medical or mental health problem, consult your physician/mental health provider. The web designer and or author of this site are not responsible for any specific health needs that may require professional supervision and are not liable for any damages or negative consequences resulting from the use of Crystal Healing Wands. Information and references are provided for informational purposes only and do not constitute endorsement of any websites or other sources.

Discover the ORIGINS OF THE CRYSTAL WARRIOR